Home » Laneway Festival Singapore 2016
1
0
SHARES
ShareTweetSubscribe
#mc_embed_signup{background:#fff; clear:left; font:14px Helvetica,Arial,sans-serif; } /* Add your own Mailchimp form style overrides in your site stylesheet or in this style block. We recommend moving this block and the preceding CSS link to the HEAD of your HTML file. */

The Laneway Festival. The Festival of Bands You Probably Have Never Heard Of.

Here’s a run-down of what went on from my sunburnt eyes at Laneway Festival Singapore 2016.

Before I continue. Get tickets early. If you are sure you’re going to go to Laneway every year get on board with the early bird bundle of 6 tickets around October. You’ll save around $80 per ticket.

We arrived this year around 2:30pm or so (I had already spent the morning in the blistering sun resulting in a blistering forehead.). Bring sunscreen, people.
Early on in the afternoon, the crowds looked way down on last year which was perhaps a result of the new no re-entry rule. The grassy knoll (back and to the left) where we usually chill out was quite empty and we could set up our blanket fort with ease. The grass was very muddy this year resulting in a lot of ruined Converses and seats of pants that looked like terrible accidents had occurred.

Let me mention a few things that Laneway changed this year that were a bit odd.

On to the music!

I had my schedule I wanted to follow and get up close and personal but as the day wore own and I wore down I ended up sitting back and enjoying from afar. Here are some of the sets I paid attention to.

I wandered over to the Cloud Stage (one of four stages this year) to catch big Scary. I really dig their previous albums on Spotify but alas, they played mostly new and unknown hits which blended together in my ears like the muddy grass. They were fine though. Back on the Garden Stage and with terrible technical issues at the start of their set Battles…battled…on and delivered an intense and energetic set. I have to admit seeing John Stanier (he who drums for Tomahawk and drummed for Helmet )in the flesh and up close was worth the wait.

Rant Alert: If you think setting up your blanket and lying around five rows from the front of the stage while people shuffle around you; you are inconsiderate jerks.

Thundercat
Didn’t get it. Sounded like a series of unrelated musical chords. Technically they were sound but melodically not on my wavelength.

Hermitude
This set made me proclaim that electronic music is probably the way Laneway will go in the future if the crowd’s reaction are anything to go by. They had the crowd in the palm of their hands from the start. Not my cup of tea but I think they certainly would have got the organiser’s attention.

Beach House
This was not the place for Beach House. They needed to be in a smoky jazz club somewhere else. Really snooze inducing. Which is a shame as I have heard good things about them.

Grimes
Really dig Grimes’ latest album and it’s a shame she doesn’t play more of the songs in her set as they are very powerful. The songs she does play from ArtAngels stand out head and shoulders from the rest of her set. Grimes is an energetic performer but comes across a little immature in between sets which lets her down a little. Best set of the festival though. If you could relate her to someone from eras past, perhaps Cyndi Lauper’s vibe back in the 80s perhaps would ring true but I would suggest Grimes’ music is a lot more…developed and rich.

Chvrches
At around 10pm at the end of a very long day of sunshine and alcohol is the time that home starts calling. We waited around for 3 or 4 of Chvrches songs which were musically great and headed off home to beat the MRT rush. Nothing against Chrvches but we were dead.

Additional Musical Notes: As I was away watching Big Scary people said that The Internet were really good. I was too lazy to go over to see Metz but I like their stuff on Spotify (not enough to get my ass off the grass and go over to the Cloud Stage though).

So overall, another pleasant Laneway Festival experience. Can’t say I liked their choice of beer sponsor or cash/credit card payment scheme but there’s always next year to amend things. Yet again. 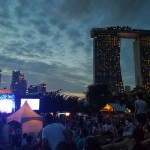 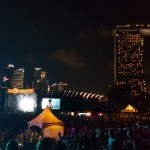 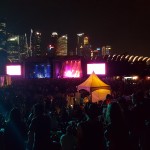 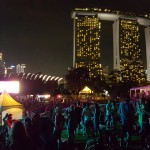 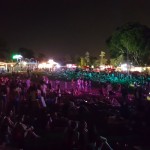 Laneway Singapore comes in to its own as darkness falls. Really unique back drop.

One thought on “Laneway Festival Singapore 2016”