Home » Bootleg Beatles: Live in Singapore
2
0
SHARES
ShareTweetSubscribe
#mc_embed_signup{background:#fff; clear:left; font:14px Helvetica,Arial,sans-serif; } /* Add your own Mailchimp form style overrides in your site stylesheet or in this style block. We recommend moving this block and the preceding CSS link to the HEAD of your HTML file. */ There’s something weird about going to see a cover band and people reacting as if they’re the real deal. It’s like taking your photo with a wax effigy of your favourite movie star. Bit strange. So it was at the Bootleg Beatles who played at the Marina Bay Theatre recently. There were screams of exultation of “John!” and “George!” and “Oh my God, ‘Hey Jude’!! Alright people, settle the hell down. It’s a bunch of blokes who are quite good musicians and dress up like the Beatles. But they ain’t them. Having said all that, they put on a good show and musically they are on point. We saw them before a few years ago and they have the same in between song banter scientifically laid out by now. I don’t think a sitting down venue is the best for them though. People wanted to get up and dance (to the songs that were a hit before your mother was born) and the refined affair that is the Marina Bay Sands Theatre handcuffed people to merely rattling their jewelry throughout. Although there was some spontaneous standing up for “Help!”

At $75-ish for a seat in the back row of the ground floor it wasn’t the worst value for money but if they came around again we probably would just let it be…..:) 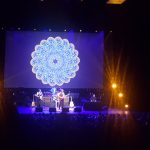 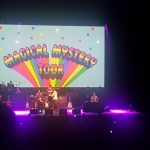 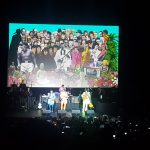 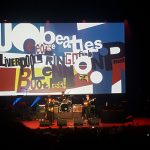