Home » Seoul Survivor
0
1
SHARES
ShareTweetSubscribe
#mc_embed_signup{background:#fff; clear:left; font:14px Helvetica,Arial,sans-serif; } /* Add your own Mailchimp form style overrides in your site stylesheet or in this style block. We recommend moving this block and the preceding CSS link to the HEAD of your HTML file. */ Changing of the guard at Gyeongbokgung Palace.

We recently visited South Korea (with a few footsteps into North Korea) for the first time since we arrived in Asia all the way back in 2008. I don’t know why we waited so long but I guess there were other places clambering for attention before it. So South Korea was that quiet kid in the corner patiently waiting to be picked for the sports team at lunch time. WHY WAS I ALWAYS LAST?!!?

We flew Korean Air for the first time. It had a pretty good reputation. It was okay, food was not good (is it ever?) but the in-flight entertainment was immense. Didn’t fly on this 747 but they still are the coolest looking planes around.

After much trundling around the various tourist websites I decided to pick Metro Hotel Myeongdong (my Trip Advisor review here) for its location and proximity to grab a tour bus to the DMZ which left from the nearby Hotel President. Why not stay there then I hear you splutter through some oat cakes?! It was quite bit more expensive. So there. The Metro Hotel was small but it was comfortable and there was a Starbucks in the lobby. And if you didn’t manage to grab a Starbucks in the lobby there was another one around the corner. And another one. And another one. Oh, but the aircon was right over the bed and just blasted our heads with icy wind all night. I think it helped in me getting a weird headache in the coming weeks but that’s for me and my health insurance company to figure out.

Here’s what we did in Seoul….to survive…nah, doesn’t work. Not changing the post title though… North Korean soldiers used to stand at the blue sheds too but have stopped. I wonder why…?

I have a fascination with North Korea. I want to go there. This will have to do for now. I did a lot of research on what tour to take. A lot of people said just take the Panmunjom tour as the whole DMZ tour is not worth it. Panmunjom is what you see on TV. You know? The steadfast, ready for action South Korean soldiers and the baggy uniformed, emaciated North Korean soldiers facing off against each other in between United Nations blue coloured huts. View from the North.

The tour I chose from Tour DMZ took half a day with a departure at 7:30am and arrival back in Seoul at 1:30pm. This was perfect as we didn’t feel like being on a tour for a full day as was the case with most of the other tours on offer.
The tour itself is, obviously, a surreal journey. If it was anywhere else in the world it would be a bit “meh” as most of the time is spent on the bus. As it is the border between North and South Korea it elevates the whole experience to something that is definitely worth doing. 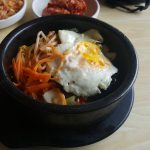 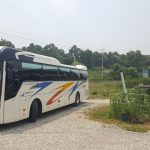 Our chariot parked up.

The amount of time you spend in the secure border area is very rushed as you try to take in what you are seeing. Yes, those are North Korean soldiers about 100 meters away! Yes, where the well manicured gravel stops and the dusty brown dirt starts is the difference between two warring countries! Yes, the building a couple of hundred meters away with the soldiers looking through binoculars IS North Korea! Yes, if you did run a few meters of gravel you would cause a major international incident!
After very little time, it is all over. Worth it? Yes. Enough time to analyse what you’re seeing? Hell no. Deoksugong is nice enough if a little underwhelming. It was 1,000 Won to get in. I was instantly befriended by a Korean tourist who wanted his photo taken on his broken screened phone. Pleasure. Walking around is quite pleasant and peaceful as overly busy streets surround the palace grounds on all sides. 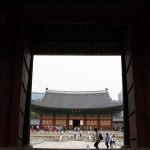 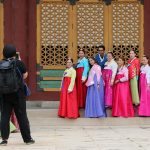 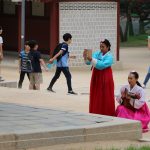 Yeah, you may as well visit this place, it’s right there. Another palace, this one built in 1395 and the biggest of the palaces from the Joseon Dynasty. It’s been rebuilt since a big fire so it’s a bit dubious to what is authentically 14th century and what was plastered together by a drunk builder-hack in the 20th century.. It certainly is interned in a huge garden and palace grounds. It’s a pretty popular place but didn’t feel too crowded. The koi pond is a nice area to make your way towards. Take a few hours and head here. 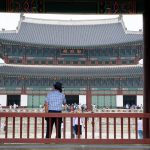 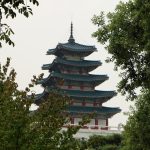 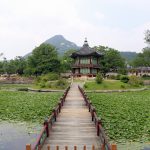 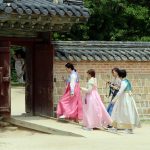 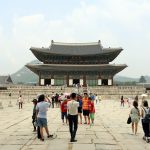 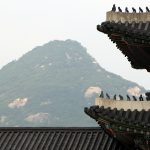 Buying a baseball ticket online for a Korean game is impossible. Don’t even try. Don’t even bother researching it for weeks on end, like I did. Don’t ask anyone. Just go to the stadium it’s at an hour or so before the gates open and line up like everyone else. Which is what we did. We were quite unsure if we could make ourselves understood where we wanted to sit as it was one of those “talk through this 5 inch thick glass window and see if we can understand each other” which is hard enough when both speaking the same language. But worry we should have not, the lady spoke enough English to get our preferred seats.
The game was enjoyable in the way an amateur game can be. Lots of walks, lots of dropped balls, so lots of runs. The constant singing, cheering, dancing, and overall noise from the crowd makes the game a worthwhile thing to go to while in Korea. We didn’t eat any of the local faire on sale there but saw enough of it to deem our decision was a good one.

Well, that’s our South Korea trip in a nutshell. Other things to note:

Vegetarians don’t have a good time in Seoul.

The 6015 Airport Limousine bus from the Airport to Myeongdong (and vice versa I would imagine but it was raining hard for our return to the airport so we grabbed a taxi) is cheap, pretty reliable and stress free.

You may have issues getting money from ATMs. We did. There’s something weird about international cards and ATMs there. The ones that worked for us were in one place: underground at the Euljiro 1-ga metro stop. There’s a bank of 5 ATMS with one or two that say International on them. Or something like that. Head there.