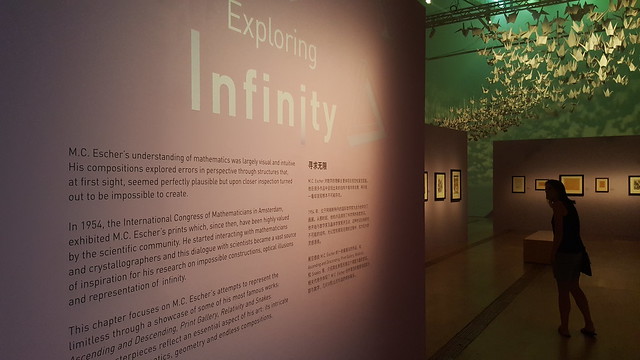 I think that’s the way the song goes.

MC Escher. You know him. You know at least one of his creations from somewhere. It’s maybe his tessellations of animals where fish turn into birds who turn into fish again and in turn..turn into blocks. 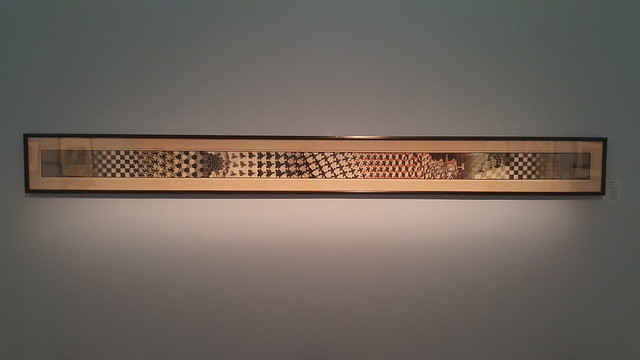 It might be his multi dimensional brain spasm inducing creations where people are seen walking in ways you can only do so with the aid of illegal substances. 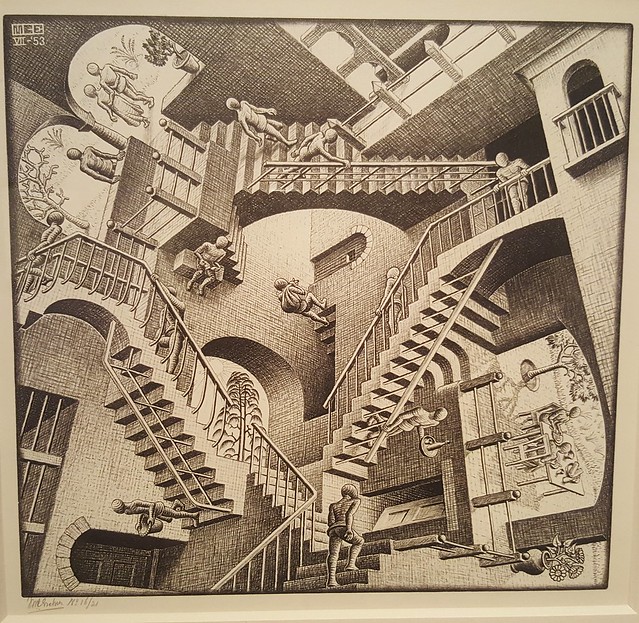 It might also be his reality distorting pieces where never-alive things come to life. Like The Walking Dead but without the zombie thing. 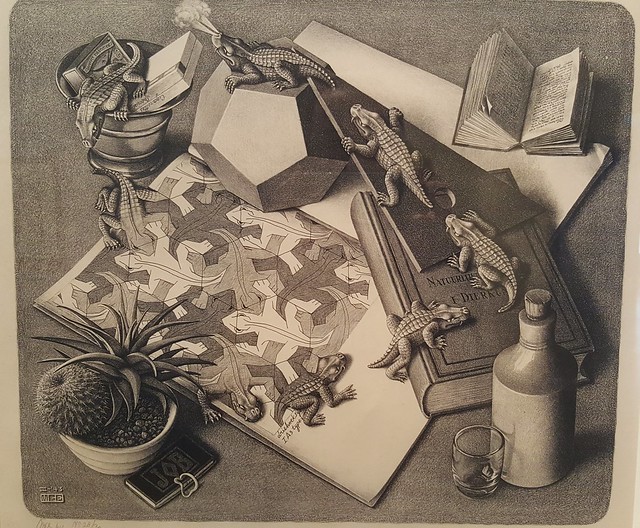 If you’re not aware of Escher you should be. He’s a nice entry-level artist into the realm of art history. His work merges happily into math and science while also engaging and amazing people who may turn their noses up at a Monet or Picasso. 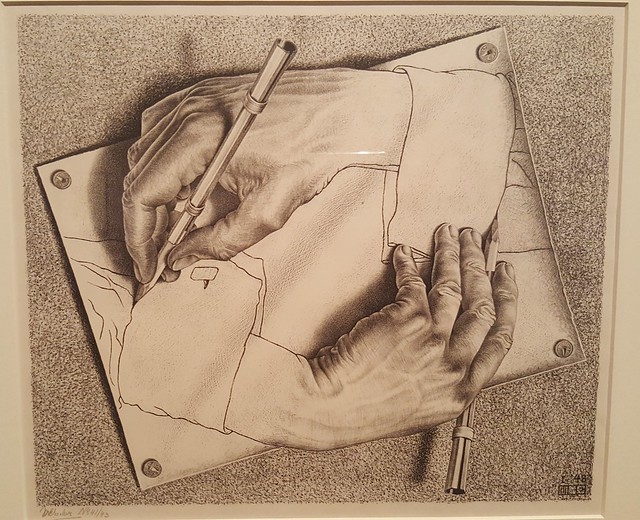 I got into Escher in my teens when warping realities was all I cared about. Dali was too insane. Munch was a one hit wonder (not really, but you know..). Escher is the thinking man’s artist. His work, while twisting your reality, makes sense. In a way. His work is grounded in reality that our brains latch onto but then he grabs our ankles flips our brains upside down, slaps us in the face with a fish, then shows us the evolved version of reality he creates. I’ll take an exhibition by Escher over a roller coaster any day. 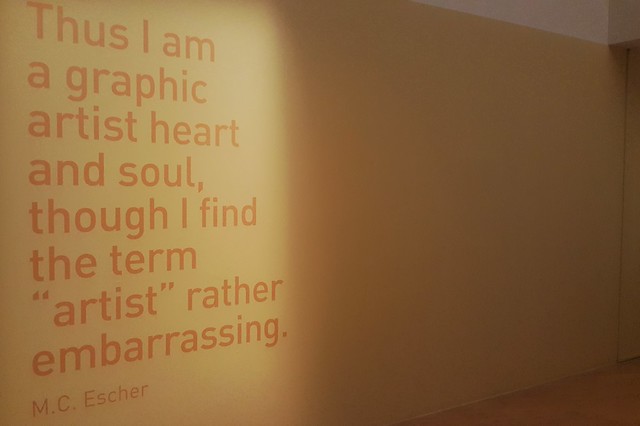 The exhibition “Journey to Infinity” at the ArtScience Museum comprises over 150 works (which are mostly wood prints or lithographs). There are a few activities for children (a big tessellation jigsaw) throughout the exhibit and with its small enough size and engaging works it should be a fun few hours for the family.
For a mere $13 (residents) entry fee it is really good value. Go at a nice quiet time, like we did, and it’s even better. 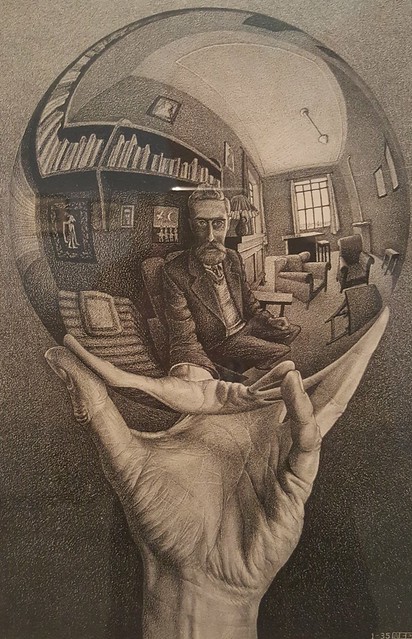 This drawing inspired me way back when I did art to try and draw reflected portraits. I didn’t fare as well as Escher.

Have a look at some of his work that is on show below. And my words. 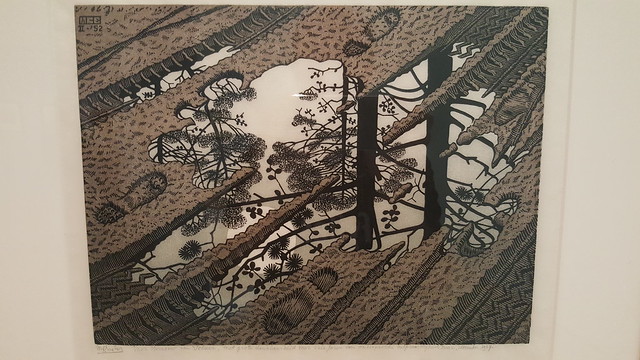 Love the inter-twining of worlds 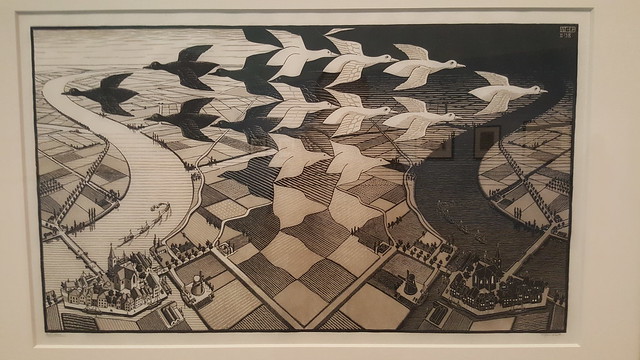 Day and Night. Night and Day. 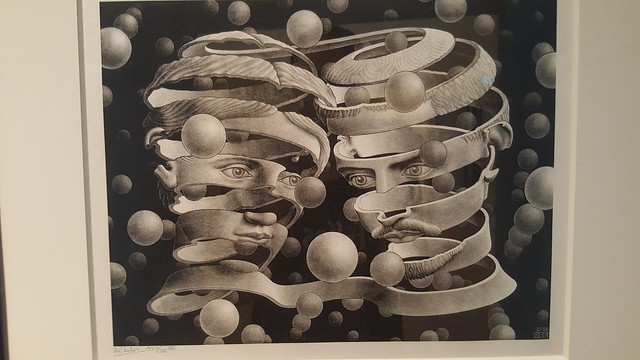 When you both have a hangover.