Who wouldn’t pay to see two of the most acclaimed film composers in world history wrestle it out in a vat of duck fat, stripped to the waist, bloodied and bruised? Sadly, that will never happen and this peculiarly gladiatorial titled event would disappoint as it was merely a musical homage to Messrs Zimmer and Williams performed by a live orchestra conducted by Anthony Inglis. And it was a jolly good show, it has to be said.

Movie scores when done right (and Williams and Zimmer do it right) can elicit more emotional connections to a movie and remain long in the memory. When you remember a scene; you remember the score. When you review a movie; the score plays a major part. Think of a movie, any movie. You now have the score in your head. You’re welcome. 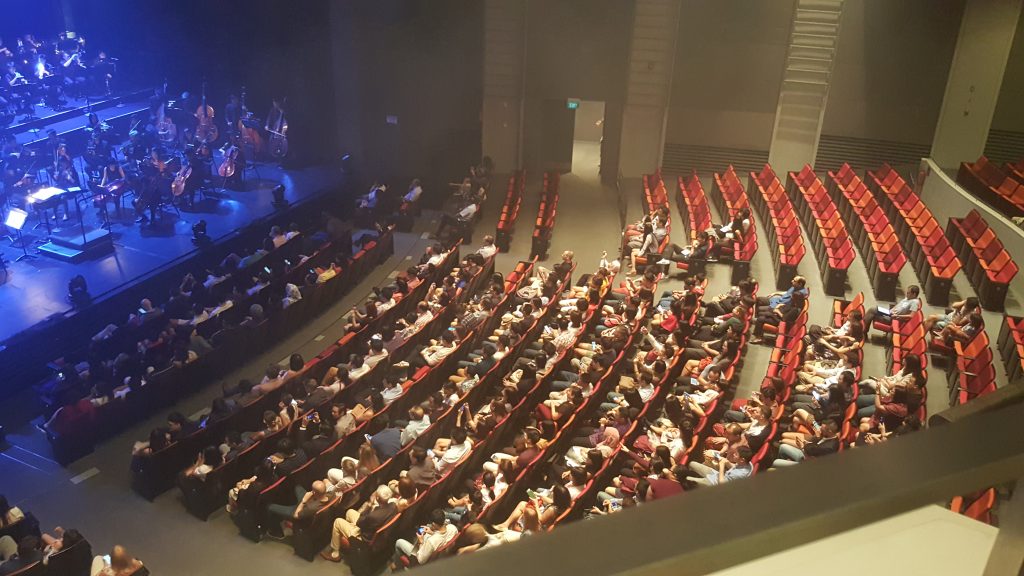 A few empty seats a few minutes before kick-off.

As I sat and listened to the live orchestra in the Mastercard Theatre in Marina Bay Sands I fondly remembered emotive scenes and pivotal moments in each of the movies. E.T theme song? Being scared out of my mind of “sick E.T”. “Time” from Inception? Spinning top totem. Princess Leia’s Theme from Star Wars? “I love you” “I know”. Theme from Close Encounters? The final aliens reveal. Jurassic Park theme? “They’re uh…they’re flocking this way”. Schindler’s List theme? “I could have saved more” Even the instantly recognisable “Hedwig’s Theme” from Harry Potter brought me quickly back to the magic of a movie I don’t really think of as being in my top 10.

As you can tell from the short list above it was a high quality set list of many famous movie tunes. Immaculately performed and backed up by an effective yet nuanced laser show. The show finished off with a couple of Star Wars scores (with a couple of Stormtroopers appearing on the upper gangways) and Superman’s theme song (Niagara Falls rescue!). The conductor, Anthony Inglis, was a motley host with humorous asides and a couple of audience participation bits thrown in for good measure. It was also a treat to focus on different parts of the orchestra throughout to see the professionalism and timing of the various sections.

As a venue, The MasterCard Theatre is a handily located venue for events like this. I was in seat 49 in Row A of the dress circle. Right on the end of a row beside the exit door G. Unfortunately this row suffers from a maddeningly placed safety bar! If you’ve got the common sense to make your way to a live performance, you probably don’t need a safety railing! Not a show stopper but a little annoying.