Home » Artbox Singapore 2017
0
4
SHARES
ShareTweetSubscribe
#mc_embed_signup{background:#fff; clear:left; font:14px Helvetica,Arial,sans-serif; } /* Add your own Mailchimp form style overrides in your site stylesheet or in this style block. We recommend moving this block and the preceding CSS link to the HEAD of your HTML file. */ One of the small corridors. Sucked.

Actually,well, I have a bit more to say.

This event (which consisted of food, drink, and other stalls) ran over two weekends at the Bayfront Event Space at Bayfront Avenue. The first weekend was followed soon after by a public backlash on the horrendous crowd control and layout of the stalls and corridors. So what would change by the second weekend after the harsh feedback? Not much it seems, although it was reported that “they moved two rows of shops to add room and set up gates for better crowd control.” If they, indeed, did that I would have hated to see the first weekend because when I went there on the Saturday evening of the second week it was aaaatrocious. It was one of those experiences where you’re in the middle of a mass of humanity and you say “just kill me now”. Getting back on to the Marina Promenade was one of the highlights of my life.

So what did they do wrong? Well basically there wasn’t enough thought put into the freedom to just walk through and look at stalls and the actual queuing of human beings. While walking you would suddenly walk into a queue cutting perpendicular to your escape route. Then, suddenly, out of nowhere, a massive garbage bin would appear from the throngs of people with its stench and piles of sun drenched food blocking you like a homeless junkie Jabba the Hutt. 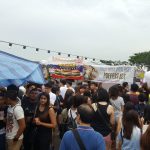 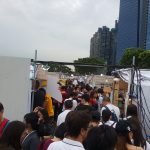 Get me out! Sucked. 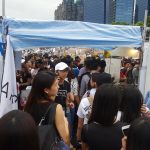 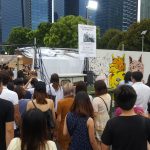 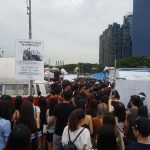 Another small entrance way in. Sucked.