Home » Impressionist Exhibition in Singapore
0
7
SHARES
ShareTweetSubscribe
#mc_embed_signup{background:#fff; clear:left; font:14px Helvetica,Arial,sans-serif; } /* Add your own Mailchimp form style overrides in your site stylesheet or in this style block. We recommend moving this block and the preceding CSS link to the HEAD of your HTML file. */ 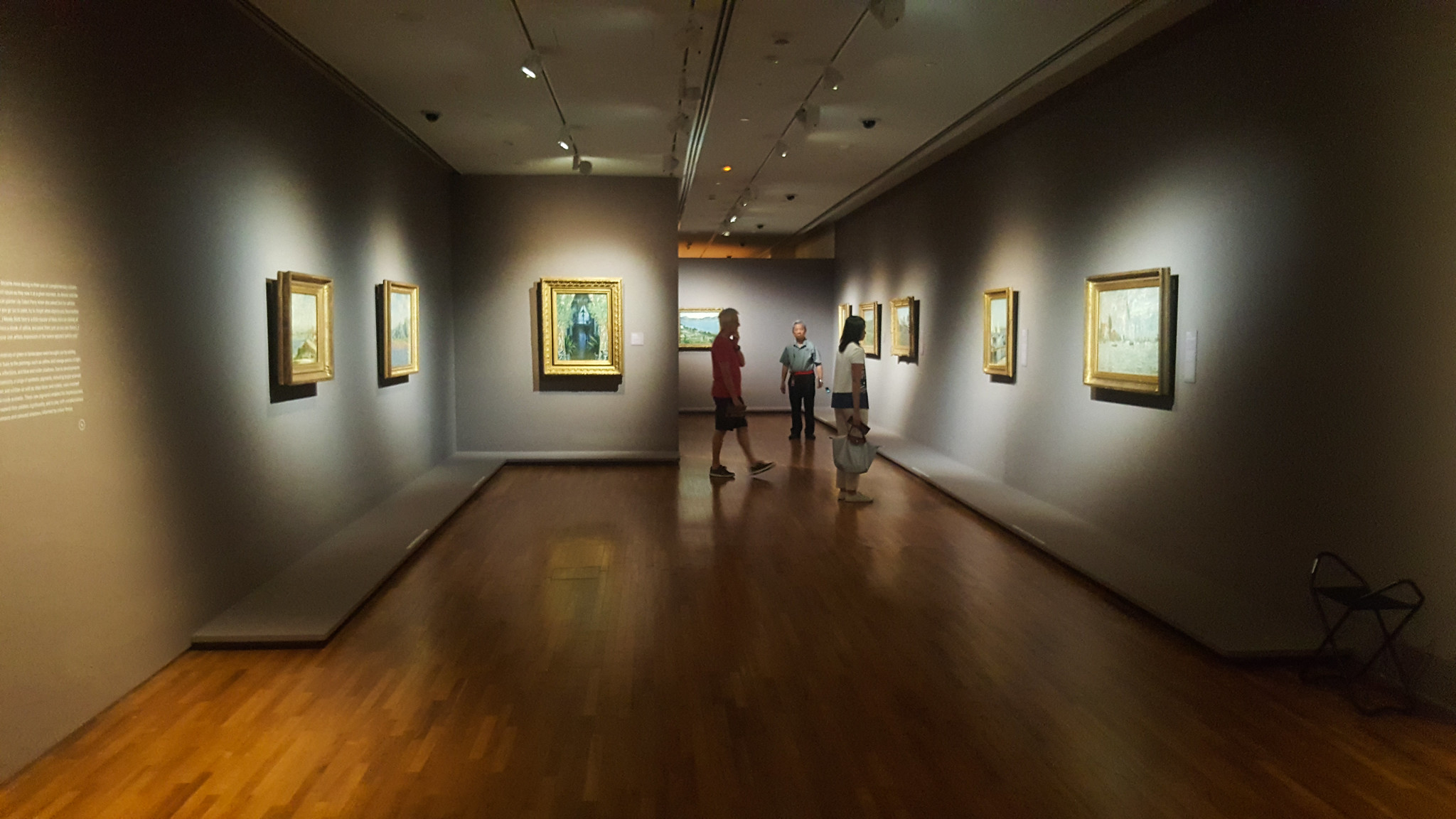 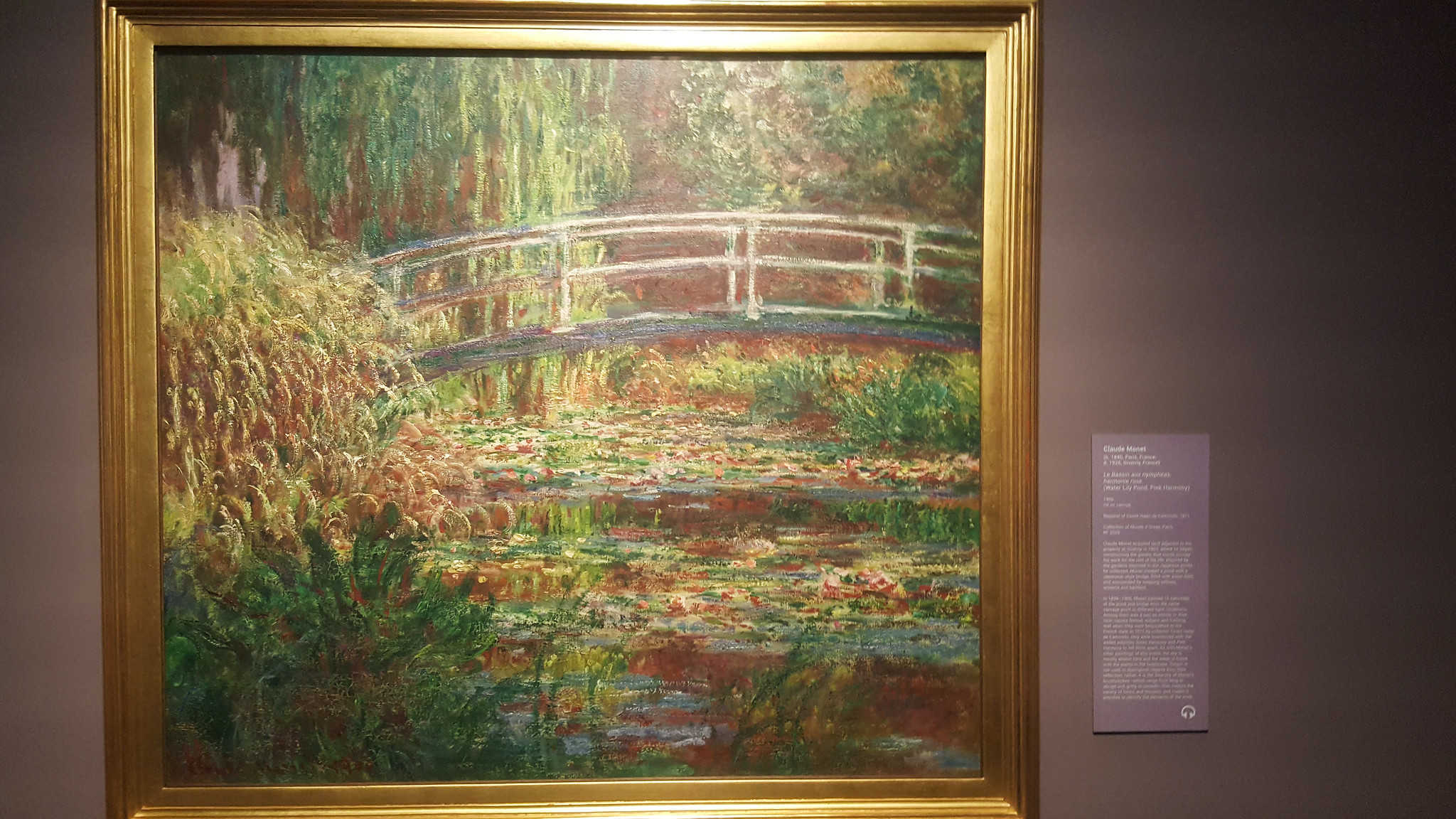 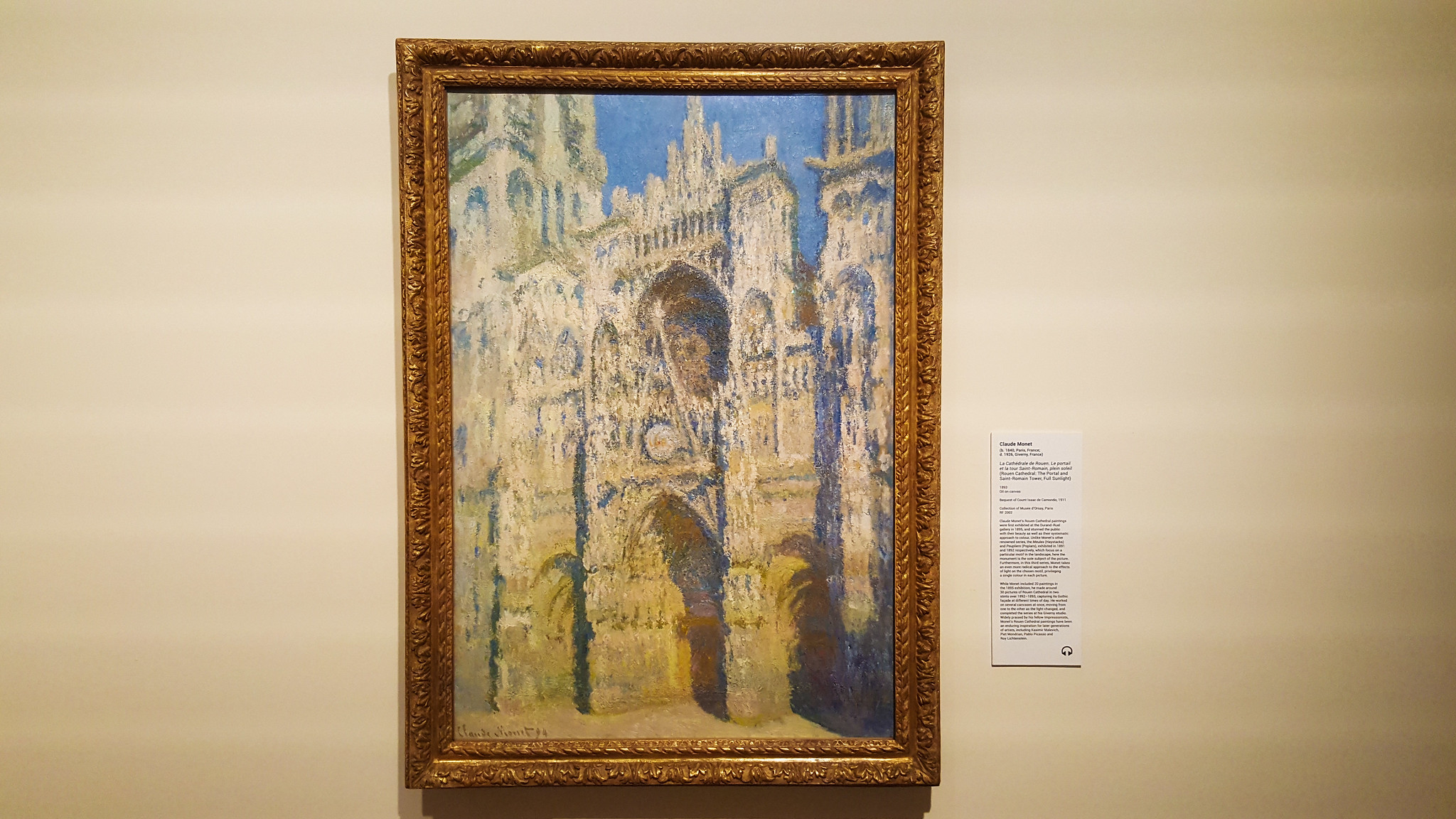 Monet along with Renoir may be seen as the pinnacle of French Impressionism and I won’t argue with that. Both artists are represented well at the exhibition with more of a Monet presence. Some of the highlights from Monet include two from his most famed “series” paintings. Of course, no waterlily painting would be a disappointment so it’s pleasing to see one here. One of many that he painted when he set up his studio in Giverny. One of Monet’s 30 Roeun Cathedral paintings is also here with his study of the thick, clumpy facade painted under direct sunlight. Renoir’s late works were severely compromised by his rheumatism in his hands and a lot of his female paintings suffered with anatomical anomalies; Gabrielle with a Rose still holding his genius at capturing the female form but beginning to show the effects that strapping paint brushes to his hands were taking. 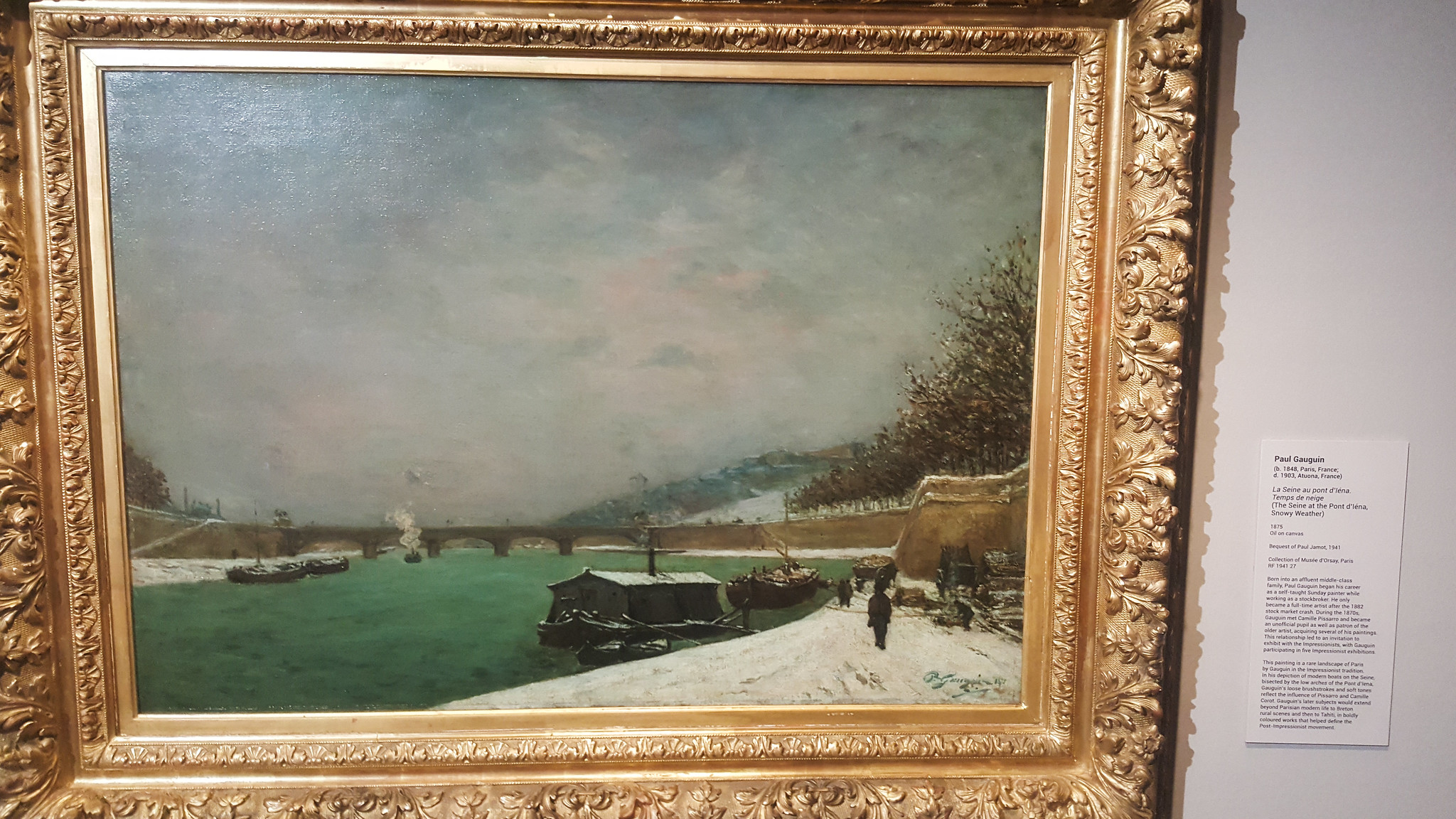 Paul Gauguin (he who was Van Gogh’s pre-ear removal buddy) and a lesser seen “normal” Impressionistic snowscape. If you are to see Gauguin in a museum or book you will see that he best known for more lurid flat colors with Tahiti ladies and storytelling through symbolism. Nothing of the sort here but very interesting to see his early work. 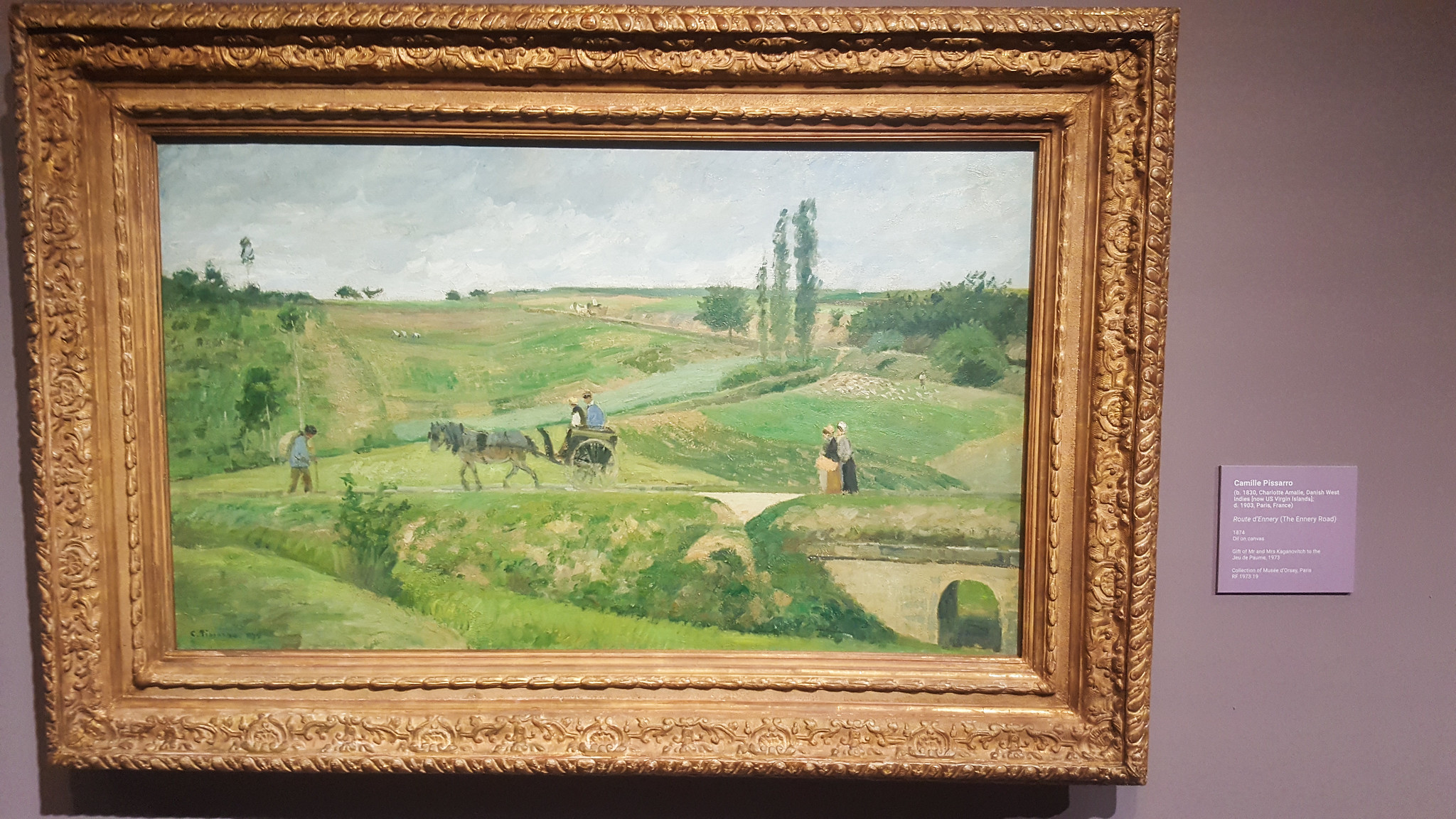 Pissarro was dirt poor and never really got out of his monetary slump until really late in life whilst Monet and Renoir found fame a little earlier in life. (but both had their horrendous moments sans argent!). Pissarro seemed to float around and adapt whomever’s style he was hanging around with at the time so never really had a set style until his 60s I guess. He is mostly known for his peasant scenes. 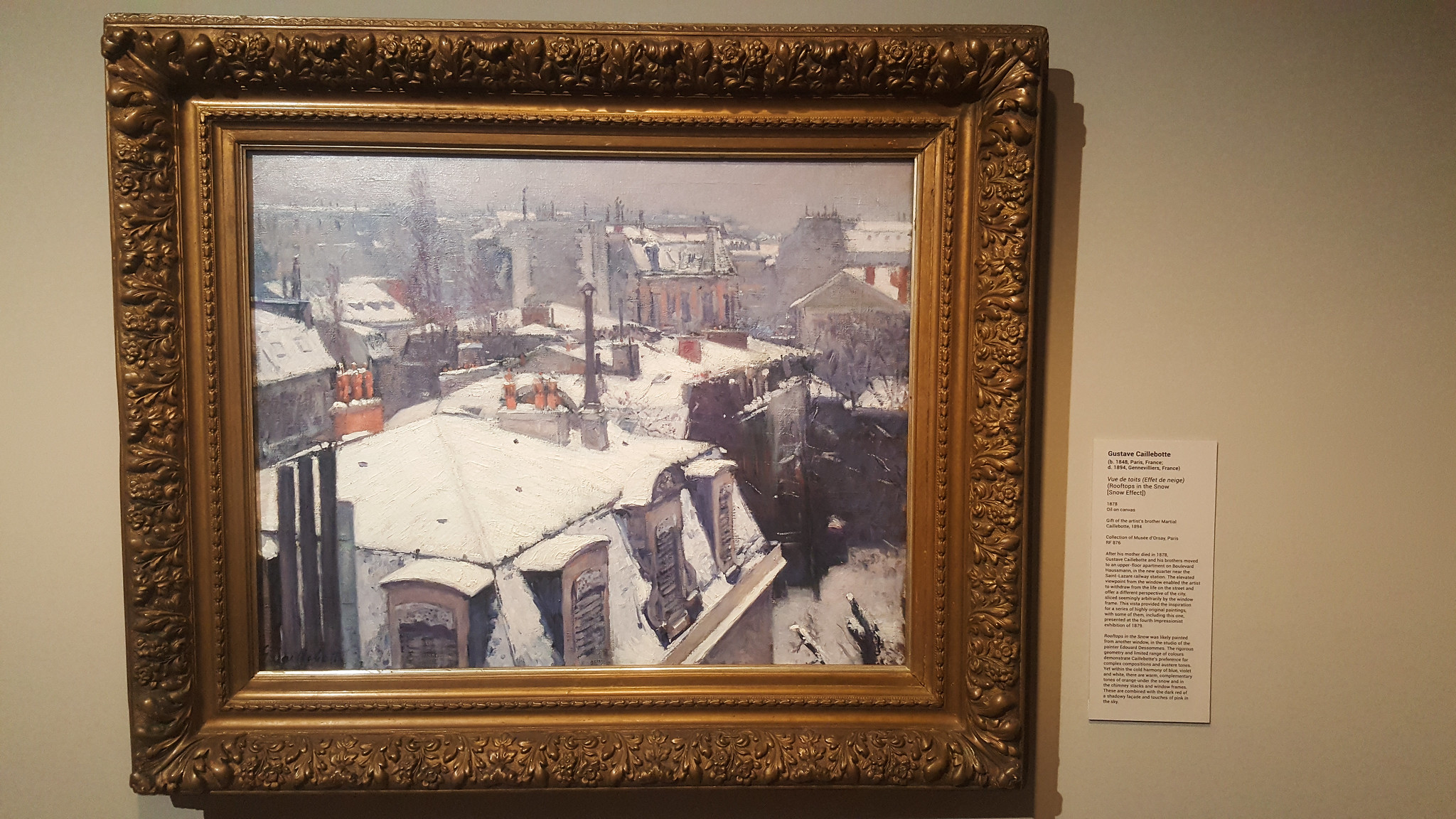 Caillebotte is probably my favorite Impressionist. Who I hear you warble?! He was a highly competent artist who painted mainly city scenes around Paris. His paintings are a little more polished than his Impressionist comrades. More importantly the dude was rich so he ended up buying a lot of his Impressionist friends’ paintings. Mainly because he liked them but because he knew he was propping them up financially. Check him out when you can. I think without Caillebotte a lot of the artists around Paris at the time may not have been able to paint as much as they could have. 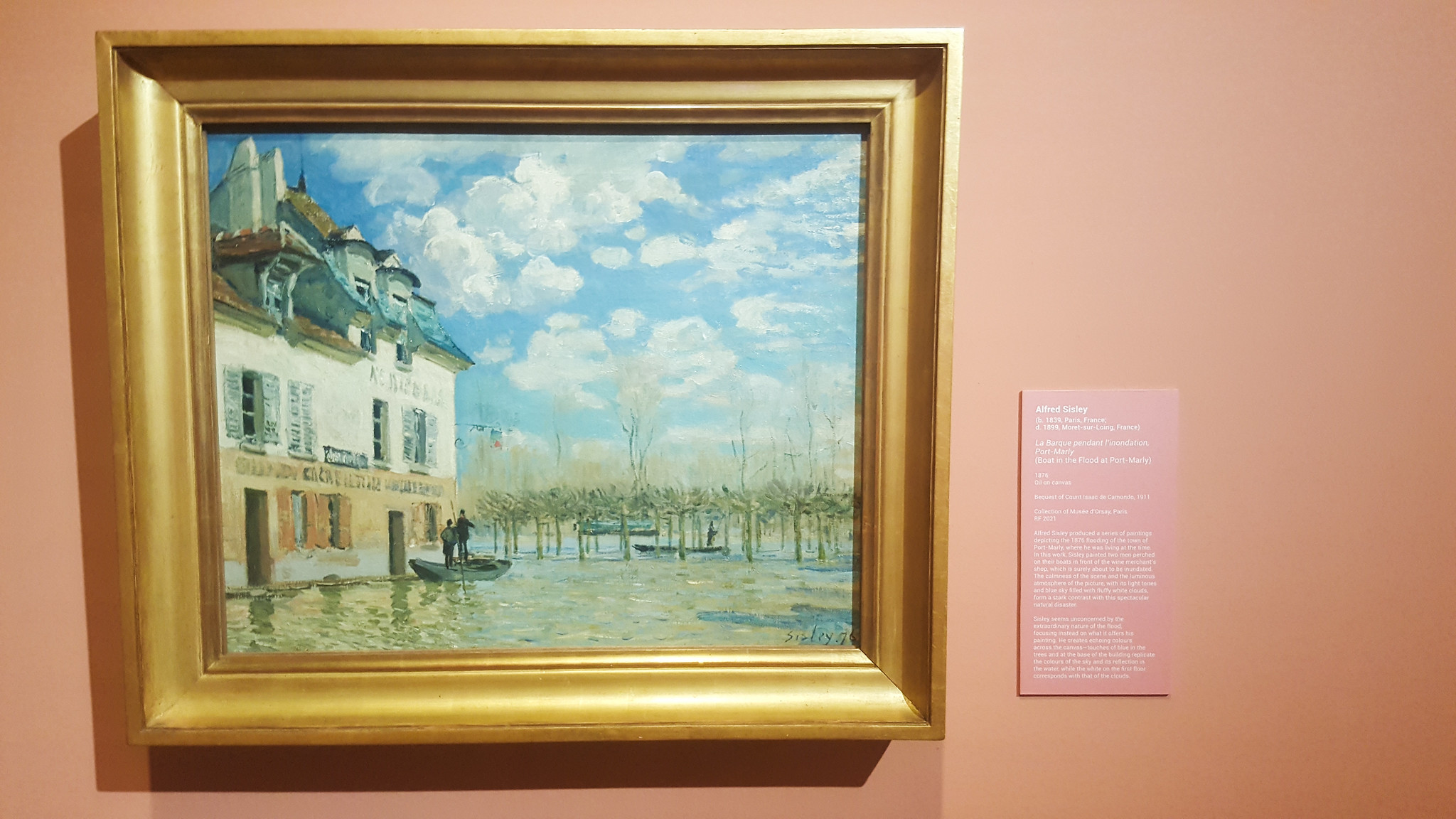 Sisley was a British dude who spent much of his time in Paris. Above is a simple yet serene and peaceful scene of a flood in the town of Port Marly. Probably the least recognized member of the movement both during his life and after. Probably was even more strapped for cash during his life (especially after his father’s death) than Pissarro. But Sisley, on canvas, remains one of the most traditional Impressionist painters in history. He stuck with painting fleeting rural scenes and painted en plein air mostly. Under-rated. 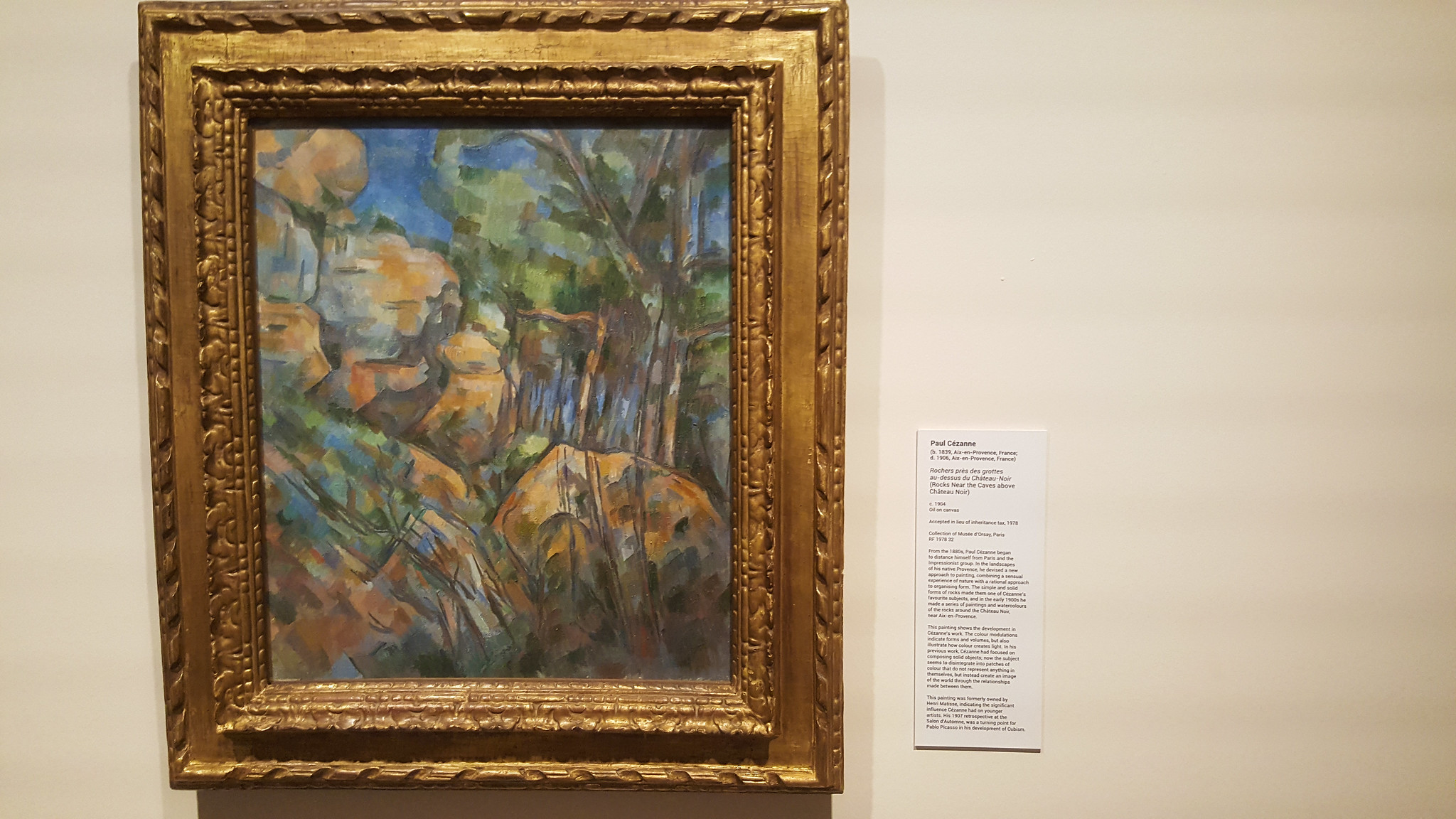 Moving on to post-impressionism or neo-impressionism. Cezanne led the charge. Meticulous to the point of not signing the majority of paintings you will see in museums around the world. He never really thought they were finished. He is a major influencer of artists of the early 20th century most notably Picasso and Matisse. Ya gotta like his flat colored geometric takes on nature. Ya gotta. 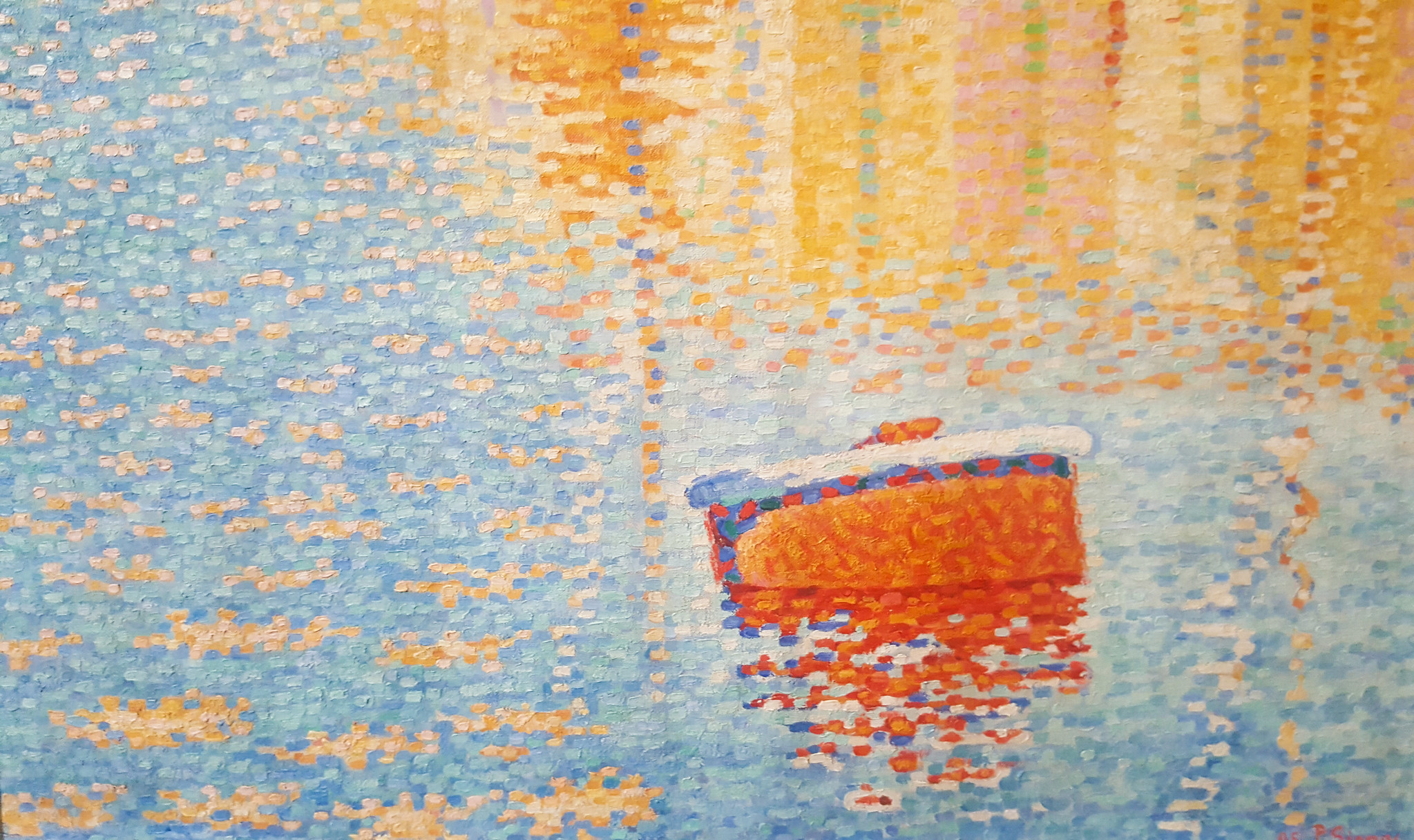 Paul Signac the other other pointillist painter. You know a Signac as his “points” are usually more rectangular than dots. Zoomed on this one so you can tell. Now you know. I like his stuff. 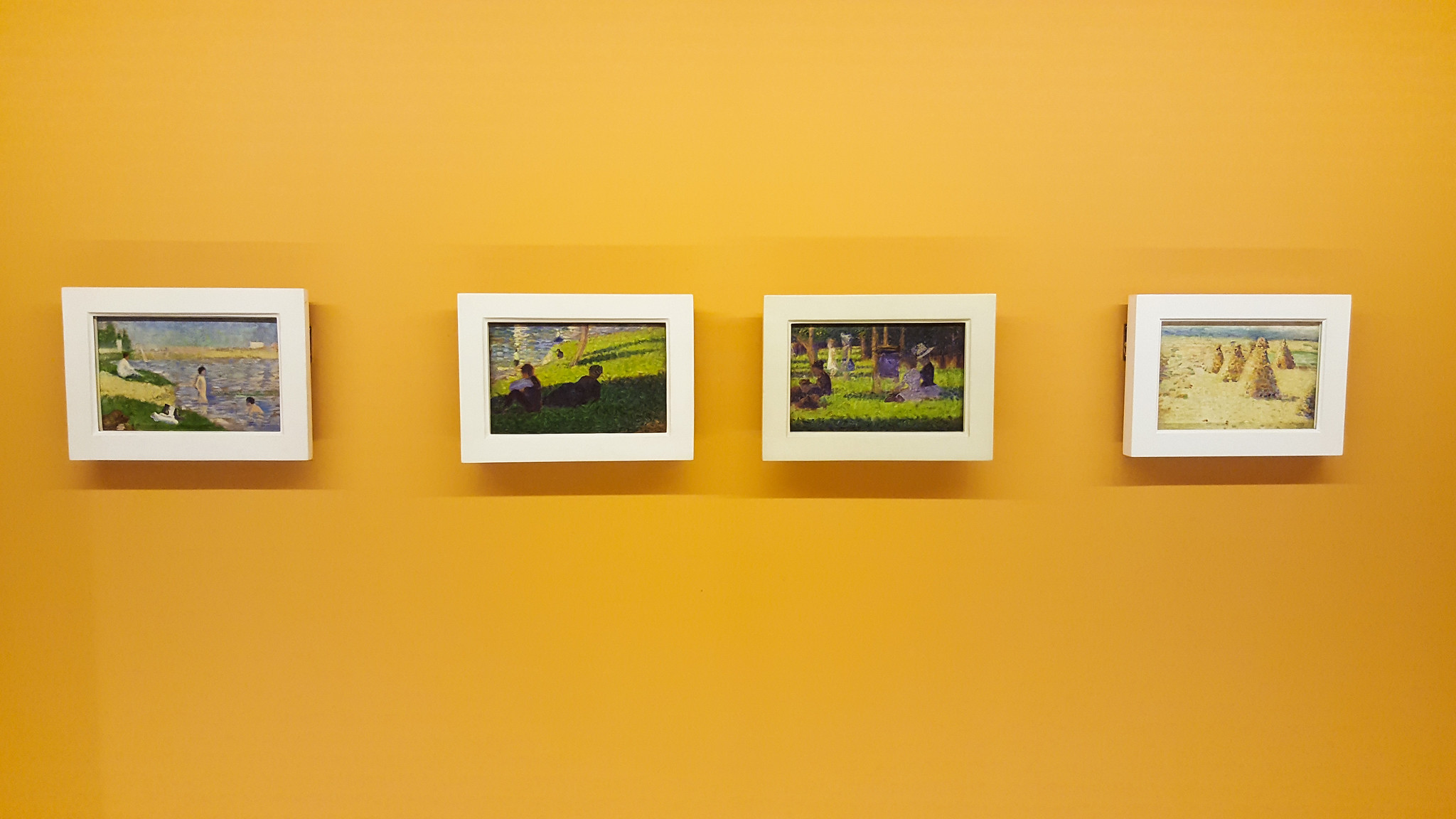 A bit of a coup is the three preparatory pointillist sketches of Georges Seurat for his gigantic masterpiece A Sunday Afternoon on the Island of La Grande Jatte (which I had the pleasure of seeing in Chicago a few years ago). Seurat only completed a small number of major paintings but many many sketches and prep paintings exist. Sadly he died very young at 31; one can only imagine what he would have accomplished with a longer life…sniff. 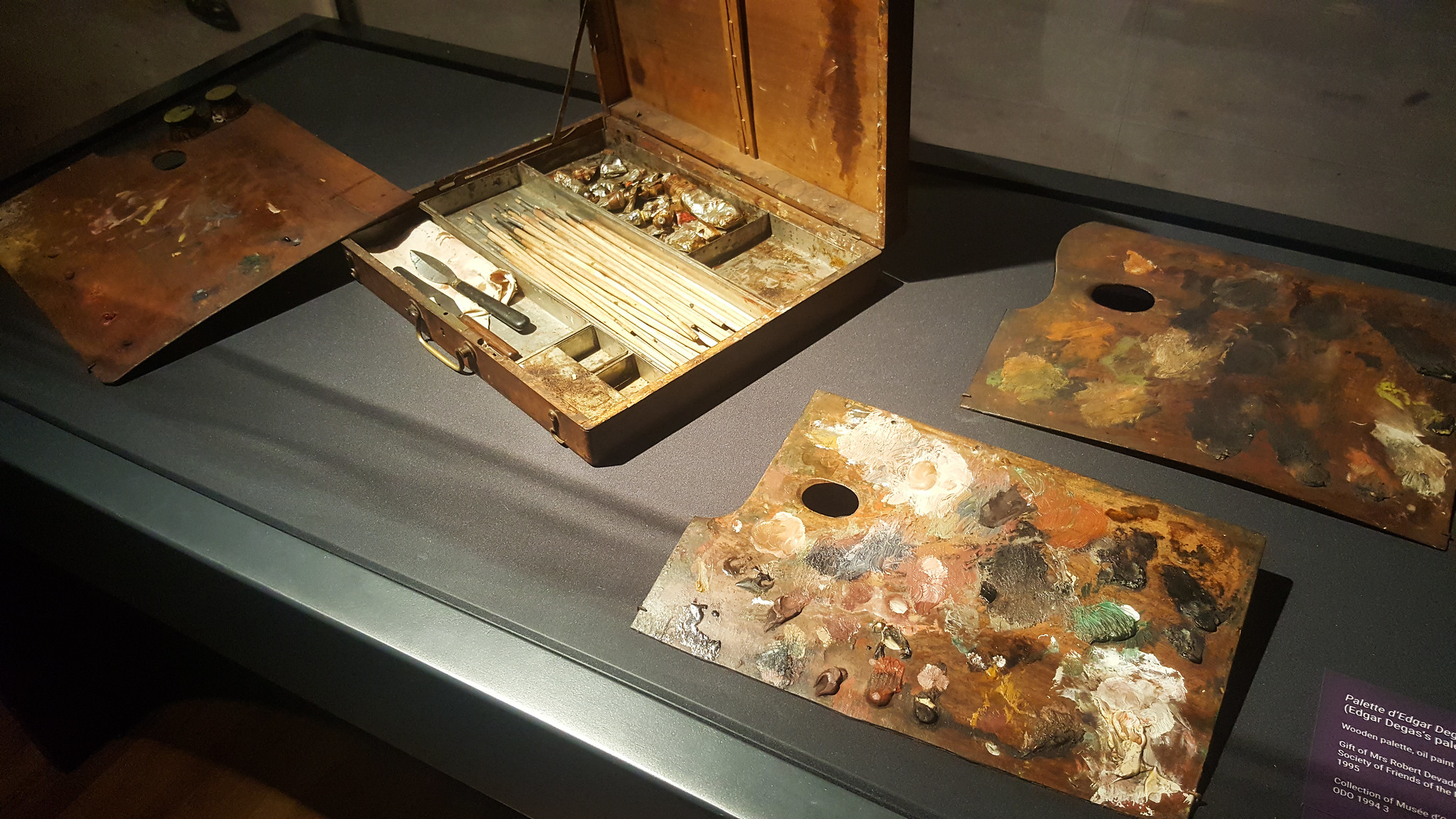 A very nice surprise on display are two palettes that were left in Renoir’s and Degas’ studios when they died. You can almost see the genre of paintings they are known for by looking at how they are mixing the colors on the palettes.