One of the ones I was not looking forward to on my Singapore Food Staples list was Fish Head Curry. I don’t deal well with seeing the once living creature on a plate. I have a very precise set of skills in disassociating live animals with dead meat. It’s how I survive. And now with my daily diet leaning heavily towards vegetarian/vegan and the seldom meaty splurges I dive into are the ones on this list, the disassociation is waning somewhat and I am feeling more guilty with every meat dish I try.

Onwards, though, I am still enjoying meat so onwards into the breach! And with Fish Head Curry I was Mariana Trenching this thang. We loped along to Samy’s Curry restaurant on Dempsey Hill to hit this thing…head on. The dish is commonly found in Singapore and Malaysia but steeped in Indian and Chinese cuisine. The fish head is served in a curry which is quite spicy (but not overly so) with a strong tomato taste throughout. Some ochre and eggplant are floating around in curry. When the bowl arrives the fish head is nicely camouflaged in its own meatiness and it’s only when you start dishing out the meat that the true head form takes shape. There is no hiding from the fact that this dude was once living. Served on a banana leaf at Samy’s, the obvious accompaniment for a curry style dish is some naan bread. Gathering fish, vegetable, and a slathering of curry within a pillowy cushion of naan gives you the perfect bite. The fish (white snapper so we were told) was more akin to chicken in mild mannered taste and not at all fishy; quite light and refreshing. Chicken of the sea? 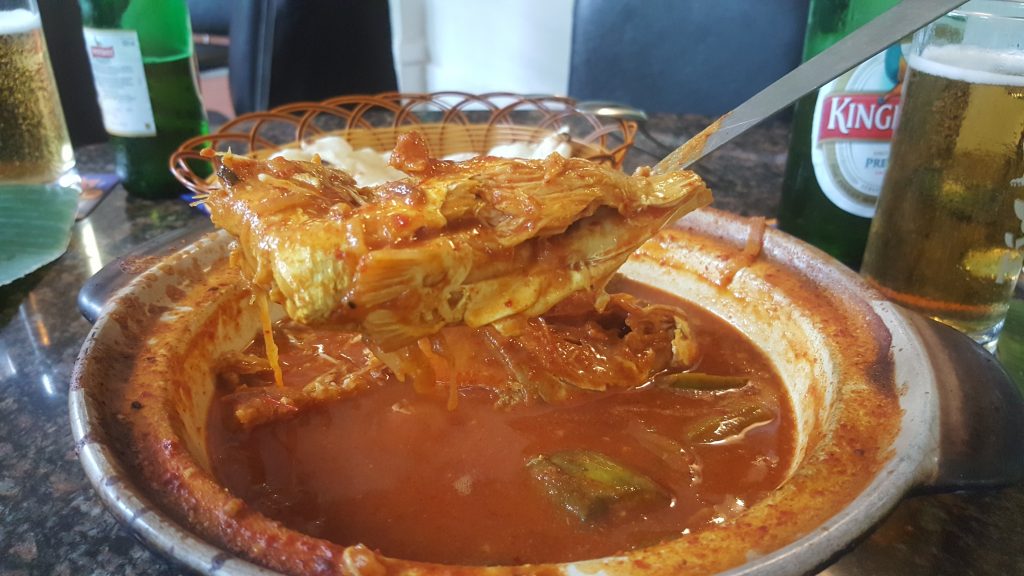 Gone. At least this fish was not wasted in any way.

The small Fish Head Curry at Samy’s goes for $21 and it was good as a starter for three people sharing. We did binge on some biryani dishes after this to fulfill all dinner expectations that were had. Samy’s itself is an interesting place, hidden amongst the foliage and amongst some other eateries. It has a good reputation and for a reason; the food was solid, tasty, and of a good quality. The service was little so-so with English a little rusty on their behalf (and maybe ours) but nothing to stop going back to (although they did charge us for something that wasn’t delivered but it was easily taken off our bill). The interior is 1980s school cafeteria in, oooh let’s say,….Ireland?! But you aren’t going for the interior you are going for their menu contents. And the menu contents are something you will come back for.