A Half-Day In Zagreb, Croatia

Home » A Half-Day In Zagreb, Croatia
0
6
SHARES
ShareTweetSubscribe
#mc_embed_signup{background:#fff; clear:left; font:14px Helvetica,Arial,sans-serif; } /* Add your own Mailchimp form style overrides in your site stylesheet or in this style block. We recommend moving this block and the preceding CSS link to the HEAD of your HTML file. */ Seventeen years ago I trundled into Zagreb train station (on a train) from Trieste, Italy. Zagreb wasn’t the final destination. No, no our goal was a more obscure (and seriously bullet ridden) northern spot on the map; Varazdin. Football is the answer you seek to the question you are asking.
My time spent in Zagreb back then was confined to the train platform and a quick sprint for a can or two of Karlovacko pivo at the nearest kiosk.
I hadn’t been to Zagreb since. My time this time around was slightly more relaxed; I was free all afternoon and evening to peruse its offerings.

A lot of things to see in Zagreb are just that. Things to see. You can stand, see, and move on so the time spent at each attraction isn’t too long. And every sight is within walking distance from each other. It’s an enjoyable city to wander.

What did I do? 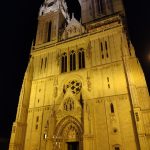 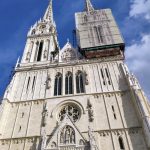 A pretty impressive cathedral in the league of world cathedrals. Certainly not Cologne but impressive all the same. I went twice, once in the early afternoon and once in the evening just in time for mass to end so it was interesting to see the people leaving and mingling. It’s worth noting that there was a very young demographic to the worshippers; Croatia still has to catch up with the ever-growing global discontent with the Catholic church that many young people have. 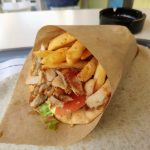 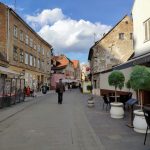 The main restaurant and bar pedestrian street. You will find something to eat here. And drink. I had a good chicken burger in Rocket Burger (with a local beer) and a tasty chicken gyros in El Greco. Originating in the 13th century but most likely looking like it is today from the 18th century. A stone arch which houses a little church dedicated to Mary. Mother of God. Who else? You can walk through it, take a quick look and be on your way. Be conscious that it is a place of worship and stay out of the way of the prayer vibes directed at the statue of Mary. A short pant uphill from the Stone Gate is the eye catching St. Mark’s Church. Its roof resembles one of those bead art things kids do. But better obviously. One of the better rooves I have seen. Doors were locked and I didn’t have a key. This is a fine stop to make to spend 20-30 minutes and it also closes later than the bigger art galleries in the city. 25 Kuna and you’re in. There’s only about 5 or 6 rooms but it’s an interesting look into the Naïve Art scene of Croatia over the past number of decades. Not an art movement I was familiar with but something that is on my radar now. Worth the quick peek. Walking towards the funicular back down to the shopping area you will pass by the Lotrščak Tower built around the 13th century. If you find yourself around here at midday put your hands over your ears as the cannon on top fires to mark the daily occasion. And why not? This is a funky little mode of transport which takes about one minute to make the ascent to the upper town and obviously the descent to the lower town. It costs 4 Kuna for a scheduled trip or 20 Kuna for an ad-hoc trip. Shortest cable car in the world I hear so that’s a feather in the cap right there. After going up in it I walked back down so I could find the… These are cool. Built during World War II and then, sadly, having to be used later on during the Croatia War of Independence as bomb shelters. These days you can use them as underground routes to different streets or just walk through them because they look pretty cool. They even have some public toilets near the main entrances. A nice park in the city centre to take a stroll along. Dog watching is key here. I would imagine it becomes a hub of activity in the warm summer months. It’s got a 19th century music pavilion if that tickles your fancy.

The busy hub of activity in the centre of Zagreb. Trams roll in and roll out and people walk in every direction to wherever the hell they are going. There’s a statue of Mr. Jelačić (a general who fought for Croatian independence in the 1800s) overseeing the daily commutes of thousands. I missed out on a number of art galleries and museums due to their 5pm closing times. I really would have like to have gone to the Muzej Mimara to see their European art collection and the Museum of Contempary Art. One museum that is up on the top of the attractions list is the Museum of Broken Relationships in the upper town beside St. Mark’s Church. Yeah, not that appealing..

So don’t get put off wandering around Zabreb for even just an afternoon as you can pack a lot in.