Home » Magritte Exhibition at Amos Rex, Helsinki
0
12
SHARES
ShareTweetSubscribe
#mc_embed_signup{background:#fff; clear:left; font:14px Helvetica,Arial,sans-serif; } /* Add your own Mailchimp form style overrides in your site stylesheet or in this style block. We recommend moving this block and the preceding CSS link to the HEAD of your HTML file. */ I got into Magritte in my teenage years; his weird manipulation of everyday objects in juxtaposition with their surroundings rebelliously scratched an itch that Impressionism was bestowing upon me. I still love Impressionism but Magritte’s Surrealist styles are always a nice weird distraction. I also feel that Magritte is a more accessible entry into Surrealism than Dali and Ernst.

The Amos Rex is a compact and relatively new gallery (August 2018 opening) in the very centre of Helsinki. Visitors to the city can enjoy the Amos Rex without even going inside the building as its undulating roof is now a tourist attraction in itself with children and adults alike clambering around it. There have been large lines going around the corner in its opening few months but as I wandered in on a Monday at 4pm there was only a short line. General admission €18, reduced rate €12.

The organization of the Magritte exhibition actually makes a lot of sense. Based on his own Life Line lecture, given in Antwerp in 1938, the exhibition goes through the different artistic periods of his life. Which, if you think you know Magritte, gives an insight into some of his lesser known works of art from his lesser known periods. Interesting stuff. A pretty “meh” period for Magritte; trying to find his foothold in his craft and just going with the flow of the times which happened to be Futurist. He, himself, would readily admit his natural disconnection to the Futurist movement and destroyed a lot of his work from this period. The work on show at this exhibition, Nocturne (1923), reflects this noncommittal approach to Futurism and is quite forgettable. A period of early exploration into his Surrealist motif of disorientation. His paintings here are inspired primarily by Giorgio de Chirico. You will find a lot of landscapes and interior scenes of random objects in this time period ala de Chirico. An important part of Magritte’s life. In conjunction with exploring his Surrealist style, Magritte developed his famous word paintings. His most stand-out piece of this time being The Treachery of Images painting of a pipe with the words “Ceci N’est Pas Une Pipe“. This Is Not A Pipe. Included in this exhibition is a rough sketch of this work. Some might suggest the best time period for Magritte’s work. His exploration of items co-existing, co-mingling and intertwined with other items in weird unnatural ways came to a creative head in this decade. Most of the works you know from Magritte come from this time frame. The most important piece included in this exhibition is La Lampe Philosophique which presents a unsettling depiction of a man smoking…his own face…!…whilst a candle wraps itself around a pedestal. Meaning behind it? Probably. But the visceral almost shocking reaction to the main point of focus is what I take away from it. A Magritte move of the highest order. A period that totally surprised me and one I either didn’t know of or forgot about. Colorful? Yes. Appealing? Not so much. This was a reaction to the dark days of World War II with Magritte choosing a bright and vibrant palette. It’s almost as if his eagerness to recreate Renoir’s style over-rode the surrealist concepts that Magritte had been building on. Having said that, this period can also be seen as Magritte not giving a shit and it’s a thumbing of his nose at the art world and the world in general crumbling around him. Exploring this style made more sense for him at the time. Another time where Magritte took a side road off his main artistic journey stylistically. A Fauvist inspired period where you might be forgiven for thinking you are looking at a Matisse or a Derain. If the Renoir period was a accidental nose thumbing then the Vache period was a full on in your face nose thumbing as an act of defiance and liberation of the Parisian critics. Mic drop. With Magritte’s final major style period he found international fame whilst going back to his roots and exploring everyday objects and their peculiar “being”. The bowler hat men raining down from above? From this period. The bowler hat man with the apple in front of his face? From this period. It was a time of intense exploration and bizarre thought-provoking compositions. Bowler hats were seen by Magritte to be “not original. The man with the bowler is just middle-class man in his anonymity.” Which is exactly why he puts them in reality altering and mind-bending situations. 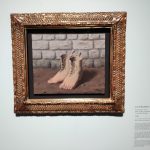 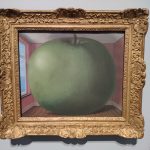 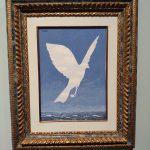 So, all in all, a nice little summation of Magritte’s work. Obviously without any hugely important works but works that give you a general impression of what each time period of his life produced.