A Walk Between 5 Temples in Kyoto, Japan

Home » A Walk Between 5 Temples in Kyoto, Japan
0
41
SHARES
ShareTweetSubscribe

2020 and 2021 (most likely) will probably be the only time to see a lot of Kyoto’s temples and shrines without the throngs of tourists. We are trying to take this opportunity to visit ALL THE SHRINES! We won’t. There are over 1600 temples in Kyoto (17 of them are UNESCO World Heritage sites).

Here are 5 that we walked between in a one day itinerary. As with all temples in Kyoto (and perhaps around the world), you take in each one for what they are. If you don’t dig the vibes in one; that’s fine. The beauty of temple-hopping is finding the one that you can see yourself chilling out in and connecting with the history.

Be confused at the two names this temple complex is named by; then head towards the Higashimaya area and the northern end of the Philosopher’s Walk. Head up the small street full of (mostly unopened in the midst of the epidemic) and you’re there. It’s a peaceful complex with nice greenery and pond. Founded around 1482 as a retirement villa of sorts for a shogun who wanted to see out his days in peace and quiet. 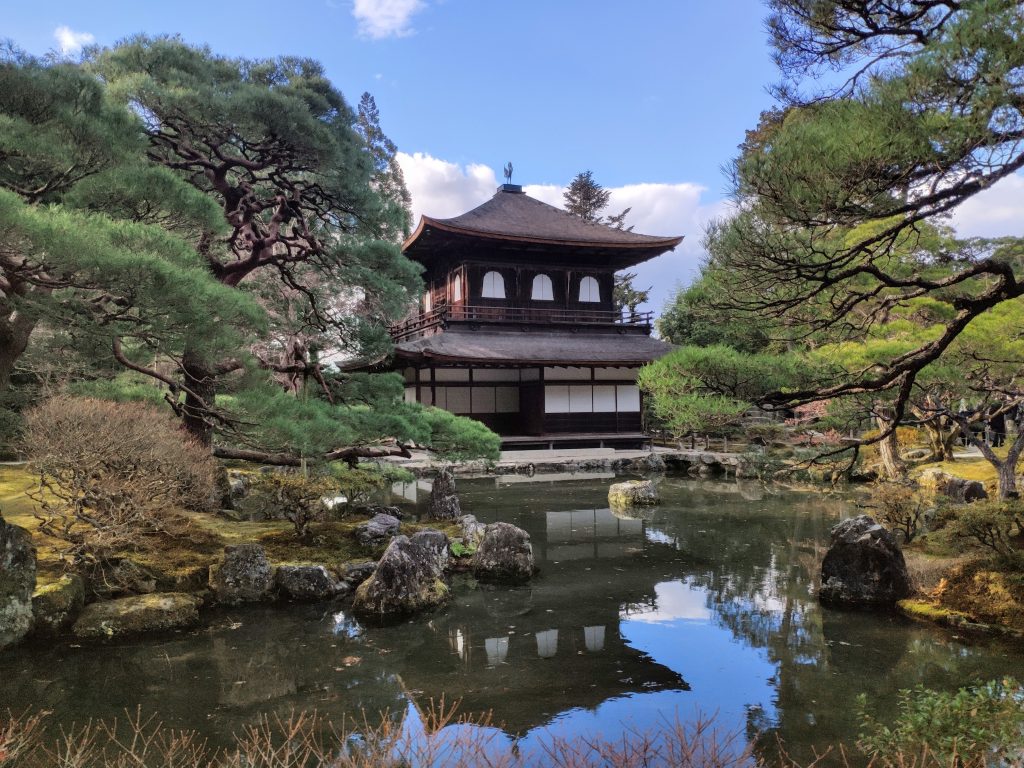 As you head back down you get some good angles over the Kinkyo-chi pond. You may be there at the same time as a stork or heron. The thing about visiting gardens and temples in Kyoto is that you will get different scenes with the time of year you are in. For us, the red leaves of Autumn were still lingering but if you go between Feb-March you will see more of the pink cherry blossoms. With its founding as a training hall for priests in 853, Eikando Zenrin-Ji is pretty old. Like a lot of temples around Japan, it looks a lot different today due to wars over the ages.
All the buildings in the complex is in a no-photography zone so you’re stuck with taking shots in the grounds and nice  but understated Hojo Pond. All the buildings inside are joined by wooden walkways and stairs so you are stripped of your shoes at the entrance. I still have a bruised toenail from one of the stairs. Nice.

The end of the walk (then you have to walk back and re-trace your steps) is the famous Buddha (Amida) looking over their shoulder. It’s weird to see a Buddha in such a pose when you’re used to seeing them standing, sitting, or lounging in temples around the world. It is quite small though. Interesting enough. No photos allowed of it. Naturally. 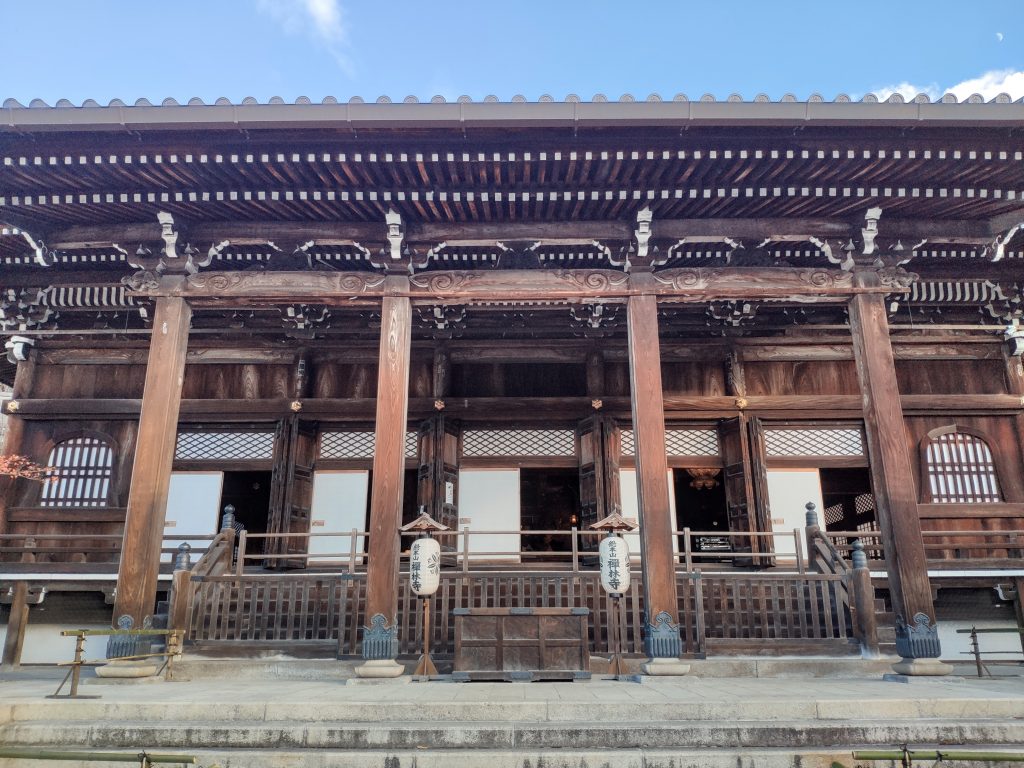 In here is the statue of the Looking-back Amida. Legend has it Eikan, an abbott, was praying and Amida came from their pedestal walked away, and looking back beckoned for Eikan to follow. So a statue was made with this distinctive po(i)se.

A nice little serene and calm garden. There are no buildings to go into of sorts so you just follow a little path around the garden and it’s nice. Nobody was there. Wouldn’t like it if it was crowded it must be said. Originally founded in 1339, it fell on hard times and was reconstructed in 1602. Established in 1605 by a noble woman in memory of her husband. Fire in 1789 was the reason for this particular temple to not survive in its original state but some of the buildings are still surviving. It’s quite a spacious complex and includes a steep little walk up to two old tea houses and as you’re coming down you walk through a nice little bamboo forest. 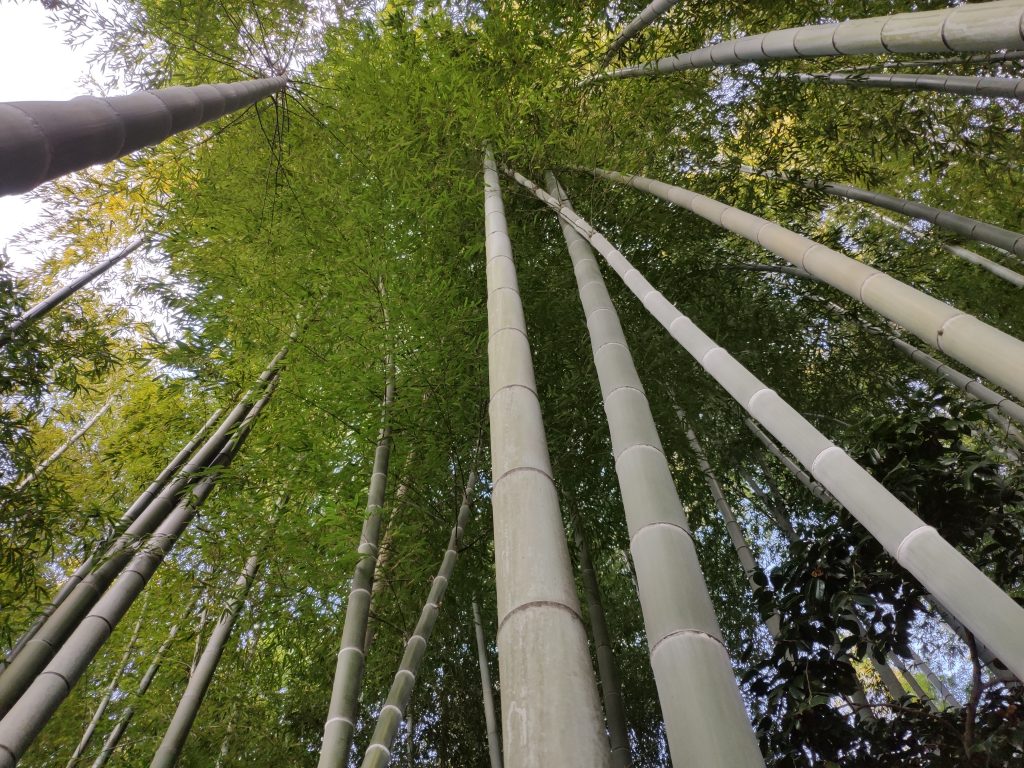 The heavyweight of the five-some. Famous and stuff. Founded in 778 but with the presently standing buildings constructed in 1633. The entrance is quite impressive. This time it was quite empty. When we visited back in 2016 it was quite quite busy. My advise is once Japan opens up again, hop on the first flight before the tour groups get themselves organized. You can get some great views of Kyoto centre and Tower from the complex. It is said there are no nails used in the whole complex. Not something you want to think about as you stand under the main structure.

This is just a small chip of the Kyoto temple experience but if you wanted a concrete walkable day of temple hopping, this particular route kinda works.

Here they are all together on a map.